French start-up Inovactis has developed a promising treatment for cancer with 100% survival in mice with very aggressive cancer. The mice were injected with modified yeast capable of activating the immune system both globally and with specific targets. This could be a new gateway to personalized immunotherapy for cancer.

Cancer immunotherapy is in full development. French researchers Clément de Obaldia and Pierre-Yves Nogue prove this with the results of their second study conducted in March this year.

“We obtained 100% survival in mice after the implantation of a very aggressive tumor of the skin, a melanoma, which normally kills the mice within 25 days on average. After these 25 days the mice in the control group were dead, while with the treated mice reached 100% survival.”

This success was achieved thanks to a treatment using modified yeast which activates the body’s immune system to fight its own tumor.

Their technology is individualized. First, a biopsy of the tumor allows, via sequencing, the identification of all tumor targets. Inovactis then modifies a yeast strain, the yeast S. cerevisiae, which has the capacity to produce tumor markers identical to those of the tumor analyzed. This modified yeast is then injected into the body in order to deliver the targeted tumor markers to the immune system.

Furthermore, the yeast also associates an alarm signal to these markers in order to activate the immune system of the patient, which is obviously essential. Nogue said:

“The novelty is that we use a totally natural micro-organism that’s absolutely safe and has all the characteristics required to provide an individualized response to each patient and each cancer.” 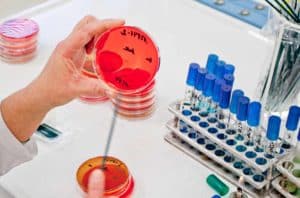 In the case of their recent study in mice, the yeasts were not injected directly near the tumors but far from them to verify that the immune system was activated throughout the entire organism. Thus, this would make combating all tumor sites possible, and potentially even the sites of metastases.

“It is very encouraging to see that our treatment activates the killer cells throughout the body and that they are able to move to the site of the tumor, even far from the injected treatment site. This allows us to destroy the tumor in a targeted way.“

But after these results, that the two scientists qualified as “very promising,” the priority now is to confirm them in tests closer to clinical reality. De Obaldia said:

“The next step is to observe the results in mice, this time with an established melanoma, who have only 10 days left to live, which corresponds more or less to the terminal state in humans.”

The study is currently under preparation and the first tests should take place in about 8 months. “We really want to show that our treatment can work on different tumor models and on different markers, which is why we have planned a whole series of preclinical tests both in vitro and in vivo to reduce the risk of failure on human bodies,” explained the founders of Inovactis. Ideally, they would like the first clinical trials on patients to take place within 3 years.

The goal of Inovactis now is to optimize and validate the versatility of their treatment on other types of cancer, including colon cancer, in order to eventually offer cancer-specific therapy after personalization of the treatment.