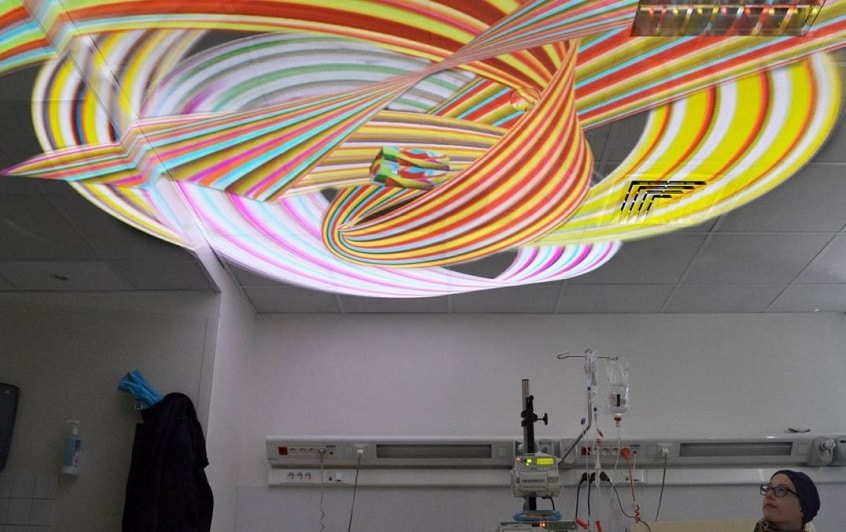 The French association Art dans la Cité (Art in the City), a world leader of art-in-the-hospital since the year 2000, recently developed a fully new concept for treatment rooms. This new system, called “Illuminart,”  brings the patient into an immersive and interactive multimedia experience. The preliminary results are very promising as the technology seems to have a positive impact on the patient’s well-being, anxiety, stress and even pain resistance.

Art dans la Cité has known for a long time how to measure the impact of art in order to bring wellness to the hospital. With the launch of “Illuminart” the association aims to bring art even closer to the patient, as director and artistic manager Rachel Even explained:

“After a lot of very positive feedback about the benefits of art in the common spaces in hospitals, we decided to go further and find a way to bring the art directly inside treatment rooms.”

The project came to life nearly two years ago at the Armand Trousseau Hospital in Paris. Even explained:

“Upon request of the pediatric oncology department, we had the opportunity to create a device that could bring art into the bubble rooms, where children stay several weeks for very heavy treatment. It took us almost three years but we succeeded in designing a small multimedia box that embeds the immersive projection and an active tablet that allows interaction with the different content.” 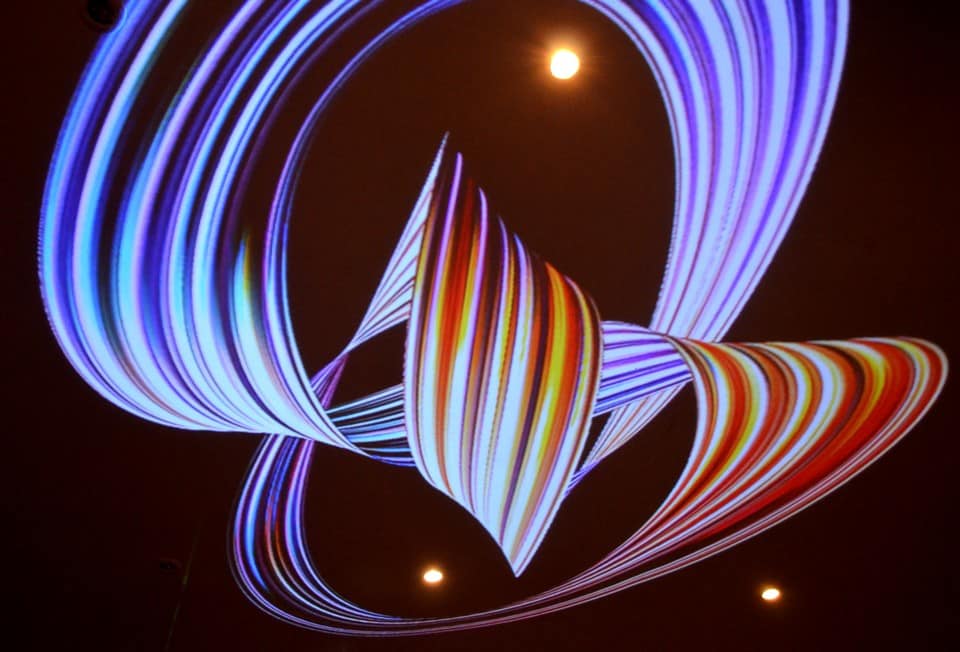 The system projects 3D audiovisual content onto the walls and ceilings of the chosen room, such as a spectacular and interactive visualization of a giant aquarium or other colorful universes created specially by local or international artists. Illuminart has already been used in more than 80 hospitals worldwide, with great success according to a poll conducted in 2018 among parents whose children have been in contact with the technology. The results revealed that for 70 percent of them Illuminart had a positive effect on their child’s pain or anxiety.

“There are very good preliminary results in terms of reducing stress and the anxiety of loneliness and boosting confidence in patients. This is what we call artistic care and it goes very well with heavy medical care and psychiatry, for example.”

Better than Tablets or Television

Dr. Raphaël Vialle, a partner of the project and Professor of Infantile Surgery at the Pierre et Marie Curie University in Paris, is preparing a scientific study on the results observed for almost two years in his department of Pediatric Orthopedic Surgery and Restoration at Armand Trousseau Hospital. He said:

We observed that pain intensity could be significantly increased without causing more pain. In other words, the threshold of resistance to pain is greater when one is in front of Illuminart’s artistic distraction tool. 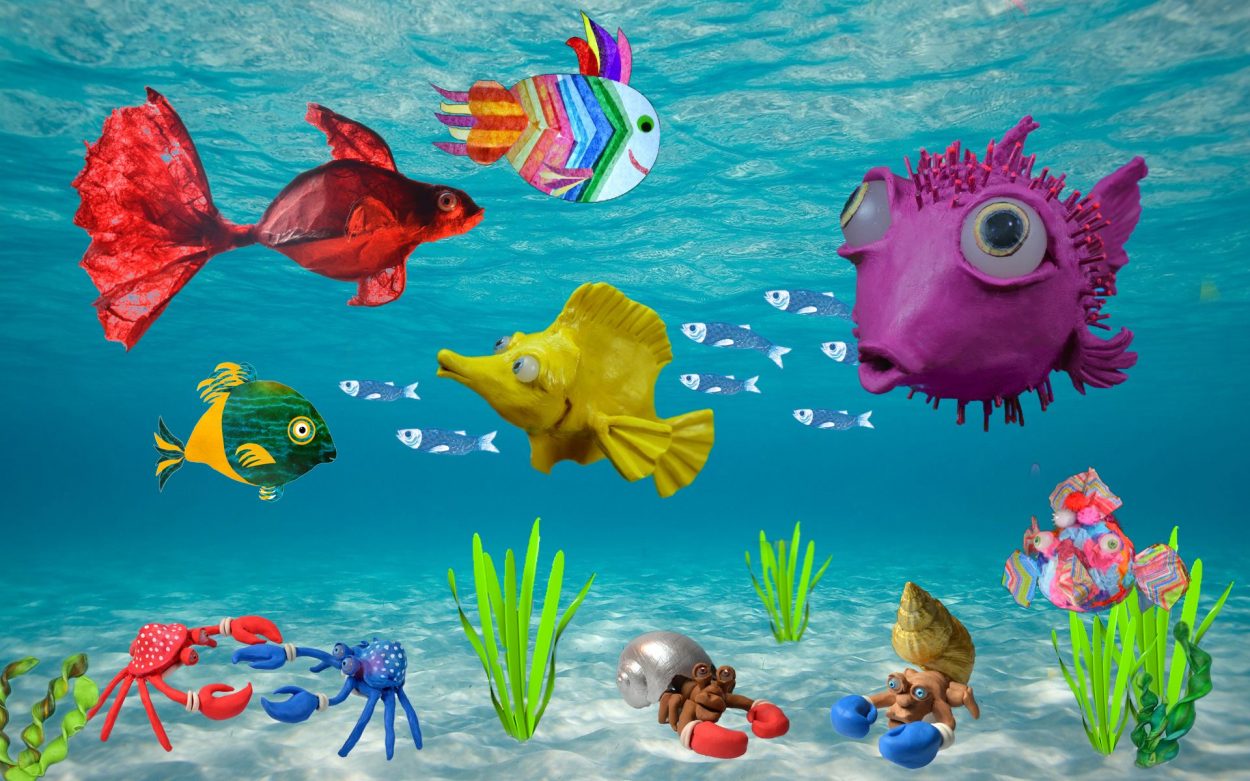 These results are “totally not comparable” to tablets, televisions or even clowns, he added.

“The big difference with other distraction systems is that you can take it directly to the treatment rooms since it’s a small box that you put on the floor. This allows the patient to be at the center of the illuminated space and to directly control the content which results in total immersion of the patient as well as his almost full isolation from his external environment.”

This technology is particularly effective among children from 4 to 10 years old, but not only. “We know that what is called sensory competition also works very well on the elderly, especially in patients a little anxious, depressed or who don’t eat much because the distraction then comes into competition with their basic state,” Dr. Vialle said. 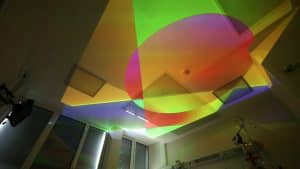 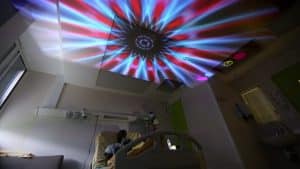 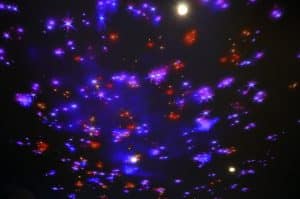 “It is time to converge things so that this system can be more widely used when patients are hospitalized, bored or anxious,” he added. To him, this immersive, nomadic and interactive art technology is not only useful but it is also a necessity in hospitals today: “Nowadays, to take action against pain is no longer a luxury but a necessity and Illuminart is really a tool that makes you feel good.”