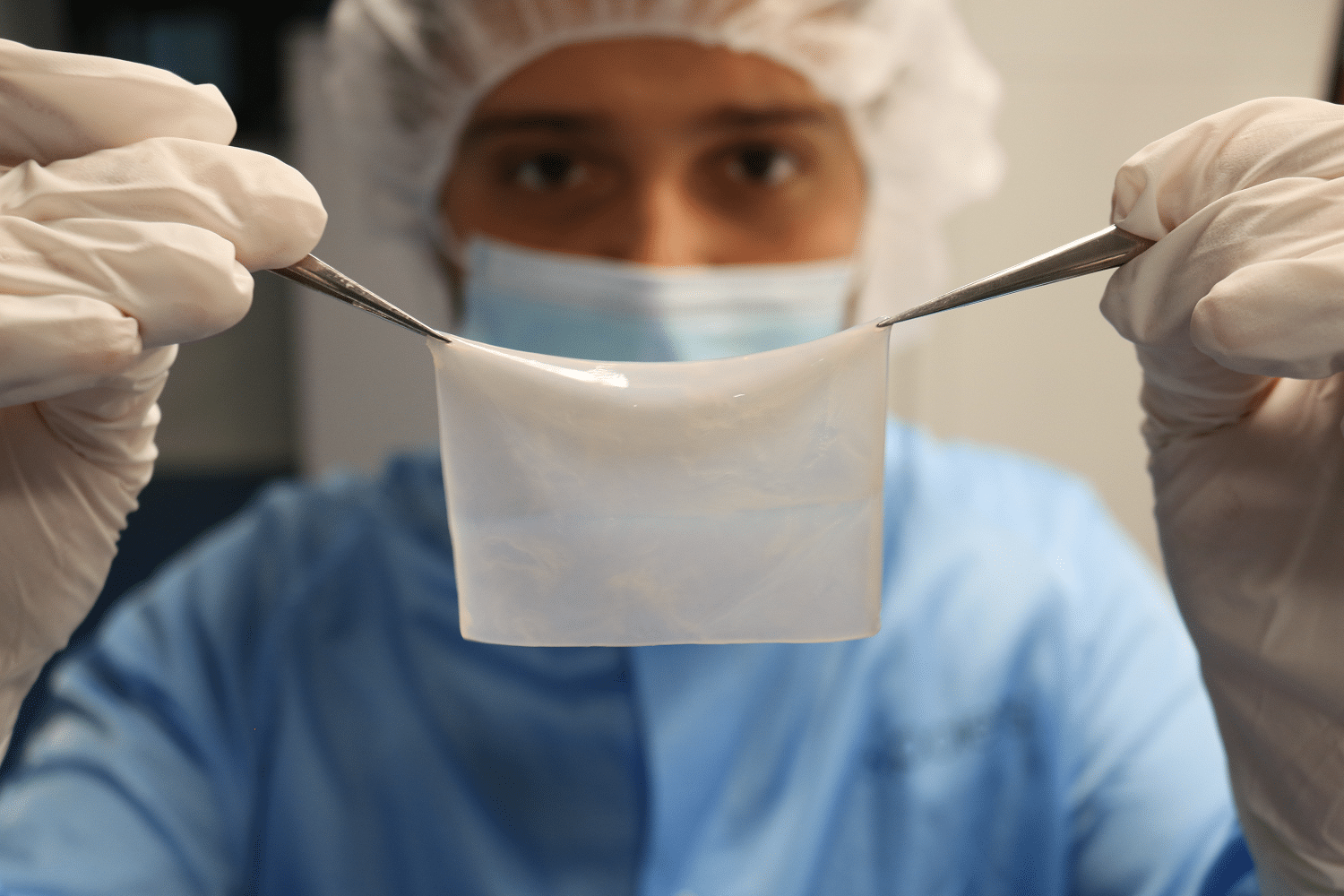 While the manufacturing of biological tissue meets major societal demands, it also faces significant challenges related to process standardization and scaling up. With these challenges in mind, the French start-up Poietis has developed the Next Generation Bioprinting (NGB) platform to achieve 4D bioprinting of biological tissue in a faster, more affordable and more functional way. The world’s first clinical trial of a bioprinted skin graft will start in 2022 at the University Hospital of Marseille. We spoke with Fabien Guillemot, CEO & Scientific Director of Poietis, and Bruno Brisson, co-founder and Director of Business Development, to find out more about this state-of-the-art technology.

MedicalExpo e-magazine: What are the main obstacles to the large-scale production of implantable biological tissues?

Fabien Guillemot: Over the last ten years, a first generation of tissue-engineered products (TEP) has been put on the market, mainly for cartilage, skin or cornea indications. These products have had good clinical results and have opened up the regulatory pathway. But they have also brought a number of issues related to the standardization of manufacturing processes, product reproducibility, and scaling up, i.e. the ability to produce them on a large scale in a cost-effective way.

These issues stem from the artisanal manufacturing method used for this first generation of products. The cell cultures depend on operators and a high level of involvement from technicians and engineers. So there was a real challenge in terms of automation as well as in terms of replacing operators by robotization. This was the approach of the Poietis project.

MedicalExpo e-magazine: What are the benefits of standardization and robotization for biological tissue manufacturing?

Fabien Guillemot: First of all, the benefit is to make treatments more affordable for patients because currently a bioprinted cornea is marketed at a price of around 100,000 euros. Despite the immense benefit to patients, it is difficult for health care systems to bear this cost. There is therefore a challenge to reduce manufacturing costs to make these strategies both clinically effective and affordable.

The other benefit is to increase the functionality of the biological tissue by deciding on the composition and architecture of what’s implanted. It has been demonstrated that controlling the architecture of tissue makes it more functional.

MedicalExpo e-magazine: Are you the first to do this?

Fabien Guillemot: Bioprinting was imagined and developed at the very beginning of 2003 / 2004, but up until now it was essentially intended for academic research applications. The medical applications of bioprinting are only starting now because the tools to meet the requirements of the regulations weren’t available before.

We have therefore focused our work on this in order to be able to start a first clinical trial in 2022 at the University Hospital AP-HM of Marseille, with a first skin graft of bioprinted tissue. We will be the very first to do so. There is currently a competing project in Asia and another one in the United States. They are both in the process of starting a clinical trial of bioprinted tissue.

MedicalExpo e-magazine: Is the NGB platform only designed to print skin?

Bruno Brisson: No, the platform is very versatile. From the moment Poietis was created, we focused on skin as a first target tissue because when we did market studies, we received a lot of interest from the dermocosmetic industry. This can be explained by the fact that at the time there was a European ban on animal testing in the development of cosmetic products. So most of the major groups were looking for alternative technologies and bioprinting was one of them.

But the platform can be used for other cell and tissue types. We have projects a little further upstream for cartilage and pancreas as well as two projects in neurology to bioprint neurons. We also have discussions in cardiology and ophthalmology. Some applications will require adaptation of the modules, for example, to manufacture cartilage, but the platform’s components will stay the same.

MedicalExpo e-magazine: The platform is also equipped with a robotic arm from the French company Stäubli. What exactly does this robot do?

Fabien Guillemot: The platform has been integrating Stäubli’s six-axis TX2-40 robotic arm since late 2017 when Poietis launched the robotization program for its printers.

The tissue is built on a cell culture plate within the platform enclosure. The printer is composed of different print heads, including one head to print the cells and others to print the other materials that also make up the tissue. The Stäubli robotic arm is responsible for moving the tissue under construction from one printing head to another.

It works with the different bioprinting modalities embedded in the system (laser and extrusion) and its software can easily be implemented for an industrial solution.

MedicalExpo e-magazine: Why did you choose their robots specifically?

Fabien Guillemot: The main reason is that the company is able to provide robots in both configurations, one for research and development (NGB-R) and one for clinical applications (NGB-C). Their robots are also Good Manufacturing Practice (GMP) compliant and are already used in pharmaceutical production, which was an extremely important differentiator for us.

The Stäubli TX2-40 robot also allows us to reach the various print heads with a very high degree of precision while meeting our needs in terms of speed and repeatability. Moreover, and this is very important for therapeutic applications, it operates with very few particles that could contaminate the tissue. Tissue contamination is a major issue because the enclosure in which the printer is placed must be a class A aseptic environment which is defined by an extremely low particle count.

The “Stericlean” version of the TX2-40 is fully cleanable and sterilizable and is reserved for medical applications. The robot, like the rest of the enclosure, must be cleanable with detergents and sterilizable. Stäubli’s Stericlean robot met these specifications, in addition to having the right dimensions because our printers cannot be too large in order to be deployed in hospital cell therapy centers.

MedicalExpo e-magazine: You installed the platform at the APHM in Marseille at the end of 2021. Can you explain how the clinical trial will proceed?

Bruno Brisson: We have a clinical research collaboration agreement with the University Hospital of Marseille. The big advantage of having the chance to work with their team is that they already have expertise in Innovative Advanced Therapeutic Medicinal Product (ATMP), which is the regulatory category for bioprinted products. They know the ins and outs of the subject, the regulatory pathway, etc.

The idea is to do a Phase I – II project, probably with dozens of patients. We will have different indications around wound healing, small burns and traumatic wounds, for example, we will not go directly to burn victims or chronic wounds which can be the subject of another trial.

MedicalExpo e-magazine: You print skin substitutes made of dermis and epidermis, this is also a first?

Fabien Guillemot: Yes, until now, hospitals had developed a capacity to manufacture epidermal sheets, i.e. only the most superficial layer of skin, using traditional cell culture methods. But the manufacture of a dermo-epidermal substitute, including not only an epidermis but also a dermis, was not feasible at the artisanal level.

With our platform, we are able to manufacture a dermal-epidermal substitute. We first manufacture the dermis that is composed of collagen and the patient’s own cells (called fibroblasts and which are previously taken from a biopsy before being multiplied to have enough to go from a 4 cm2 biopsy to a 40 cm2 substitute). Then in a second step, we print the cells called keratinocytes that form the epidermis. Once we have obtained this structure, we put it in culture and mature it until we obtain the desired characteristics.

MedicalExpo e-magazine: Is the process of amplifying the patient’s cells, when the dermis is manufactured, also done via 3D printing?

Fabien Guillemot: No, today the process is done in three steps:

1/ cell extraction and cell amplification phase from a biopsy;

2/ the printing phase, where the different components of the tissue are deposited layer by layer;

3/ the maturation phase where the tissue evolves by itself in a culture medium until it has the desired characteristics before implantation.

What is automated and robotized today is only the central phase of printing and manufacturing the substitute. The terminal phase of maturation is not automated, but not much happens, it is quite spontaneous.

MedicalExpo e-magazine: How long do the different steps and the process as a whole take?

Fabien Guillemot: In terms of time, the challenge—and this was a request from clinicians and plastic surgeons—was to have the tissue ready for grafting about three weeks after the biopsy. This corresponds with the time needed for clinicians and patients to prepare the wound. So we’ve made a big effort to develop the process to achieve that goal.

This is also the benefit of automation and robotization. Typically, before automation, hundreds of operations, such as positioning a cartridge or refilling the ink, had to be carried out and it took about 8 or 9 hours to manufacture a 40 cm2 square of skin. Now, after automation, we are down to between 5 and 10 operations and it takes between 3 and 4 hours to make a 40 cm2 square of skin. We are confident that we will be able to further reduce this time.