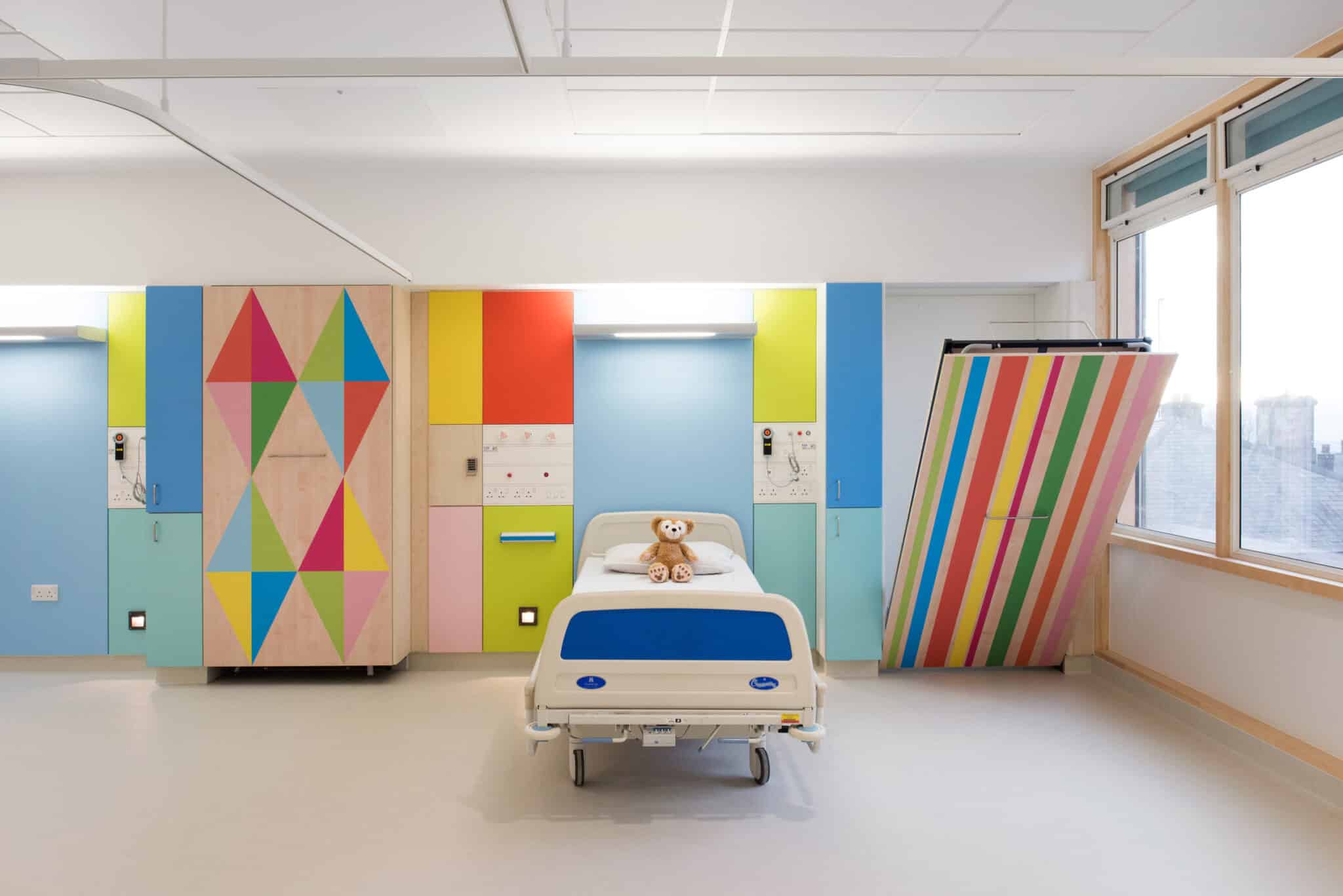 While clinical regulations and safety requirements breed an impersonal, often austere environment in healthcare facilities, a number of architects and designers are focusing their creativity on enhancing patients’ well-being, taking into account the emotional role of the environment in the healing process. Filled with light, natural materials, fresh colors and visual art, these traditionally cold and impersonal infrastructures are evolving into more uplifting spaces.

Better ventilation, open views and pleasant color schemes improve and accelerate the healing process, according to the British Medical Association. As a result, new hospitals boast innovative floor plans and contemporary architectural lines, designed to tackle the empty feeling that many patients experience during their stay. With its curvilinear shape, the Jacobs Medical Center in San Diego created by Cannon Design embodies this innovation. Design Principal Mehrdad Yazdan said:

“The health center blurs the boundaries between research and providing healthcare while elevating patient care experiences through creative technology integration, access to nature and beautiful interior and exterior spaces.” 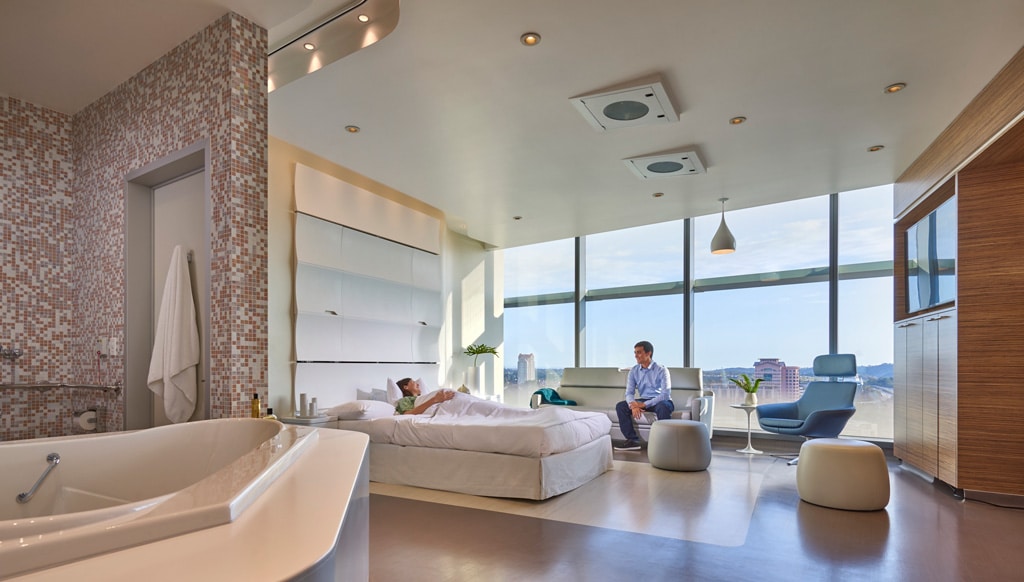 Specially dedicated to cancer patients and their families, Maggie’s Centre Barts stands out with its geometrical façade and harmonious spaces. The facility, which opened last December next to London’s oldest hospital, offers free practical, social and emotional help to anyone affected by cancer, in a stress-free environment. Designed by American architect Steven Holl, the building features an outer layer of translucent white glass dotted with tinted fragments and an interior shaped by colored light bathing the floors and walls, changing with the time of day and season to enhance patient and visitor comfort. 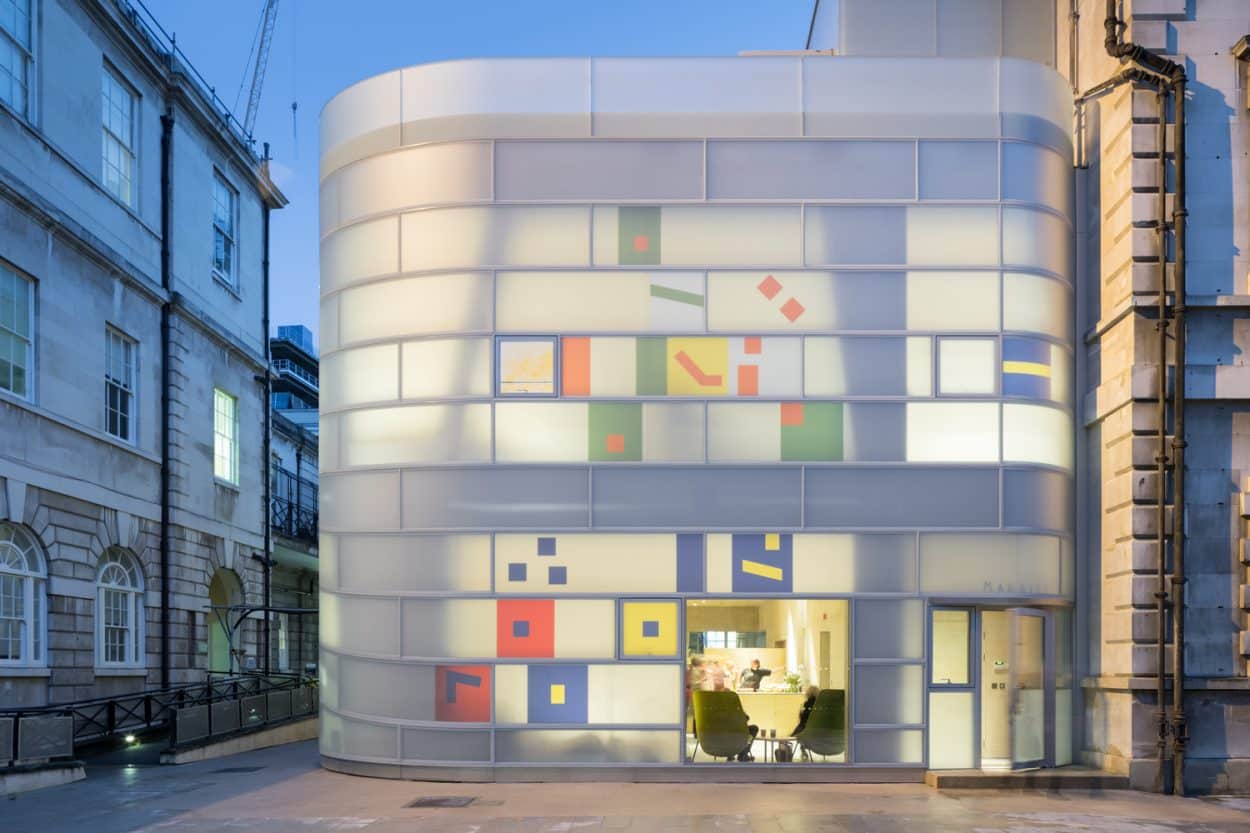 Using interior design to put patients at ease, Belgian Architect Germain Canon and industrial designer Li Mengshu have achieved a homelike environment for a dental clinic in Taiwan. “Our aim was to design a clinic we would be less afraid to go to,” Canon said.

The team used common and simple materials throughout the project to create a space that feels accessible, rather than hermetic with strong and soft colors, vibrant translucent glass, wood surfaces to touch or sit on, layouts of inexpensive colored tiles and even tiny personal shelves for patients’ toothbrushes in the bathroom. The waiting area, which imitates a comfortable living room, is fitted with low furniture, wood flooring, and soft cushions to create a familiar and calming atmosphere.

Art with a Bigger Purpose

When budget doesn’t allow for the construction of new facilities or the radical transformation of existing ones, NGOs and charities, such as the Nordic Art Initiative (NAI) and Artfelt, reach out to designers and artists to improve wards through slight yet life-changing interventions.

With the support of six sponsors, Nordic Art Initiative developed Art with a Bigger Purpose at the Pediatric Clinic in Ljubljana, a creative and interactive project whose all-around approach is to create a friendlier hospital environment. In total, 360 square meters of the hospital premises were filled with art by Črtomir Just of Slovenia, Rafael Mayani of Mexico, Ruth Hengeveld of the Netherlands and Fatheat & Bea Pántya of Hungary. The result was a colorful spatial network connecting the hospital’s interior and exterior and including murals, an outdoor fresco animated through AR technology, decorated furniture and relative backlit panels. Founder / Head of production at Nordic Art Initiative, Anna Runefelt explained:

“The task we set for ourselves was to create art that stimulates the patients, the visitors and the employees, and that actively contributes to the recovery process with its therapeutic effects.”

In the same spirit, British charity fund Artfelt asked designer Morag Myerscough to enhance young patients’ comfort in the new wing added by Avanti Architects to Sheffield Children’s Hospital. She designed colorful patterns that were laminated on the furniture in 46 en-suite bedrooms and six multi-occupancy suites, including a few rooms in a paler palette for children with conditions that might be affected by brighter colors. Myerscough said:

“From the work I’ve done in healthcare, I know that it’s phenomenally positive for people to have art in hospitals. Going into a grim and grey room isn’t going to make anybody feel good. But to go into a room that lets you know that people care about you and they’re thinking about you — it’s a no-brainer really. It makes people happier and more assured that everybody is concerned about them and wants them to get better.” 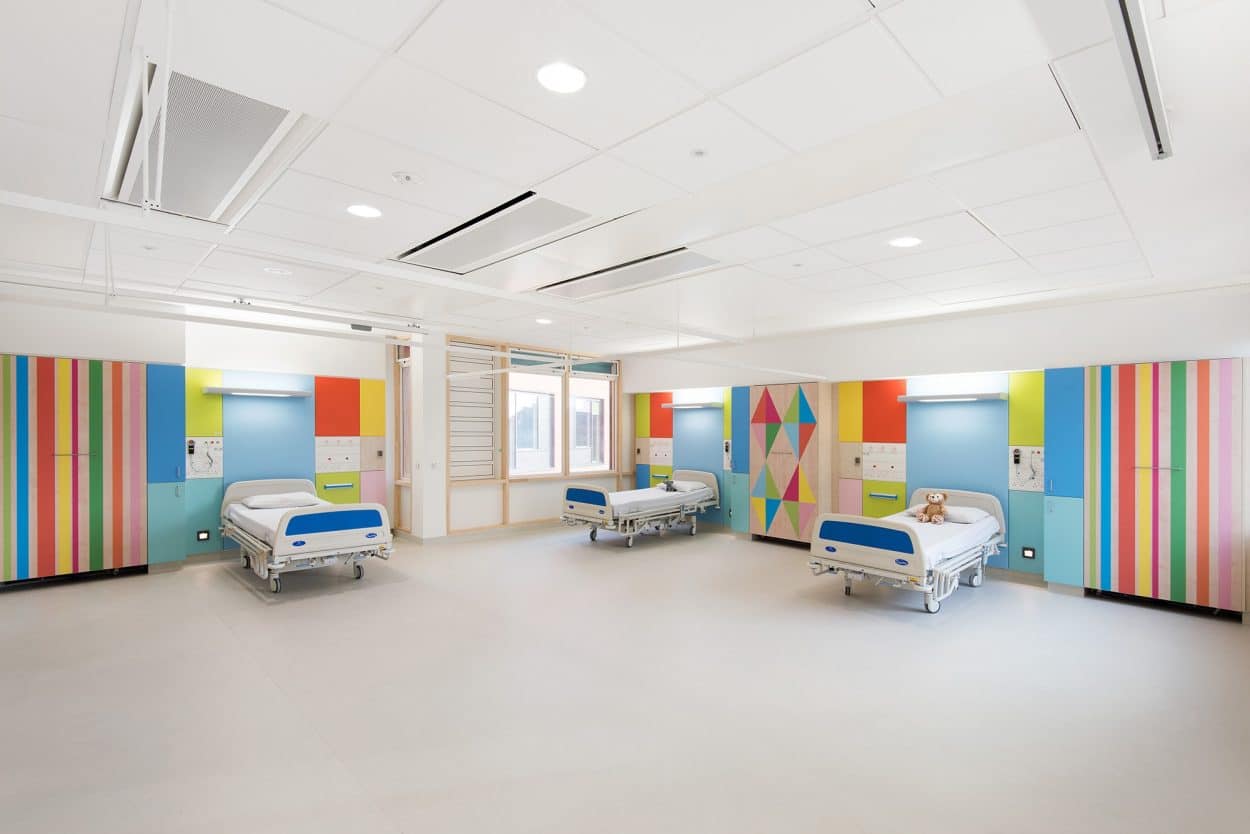 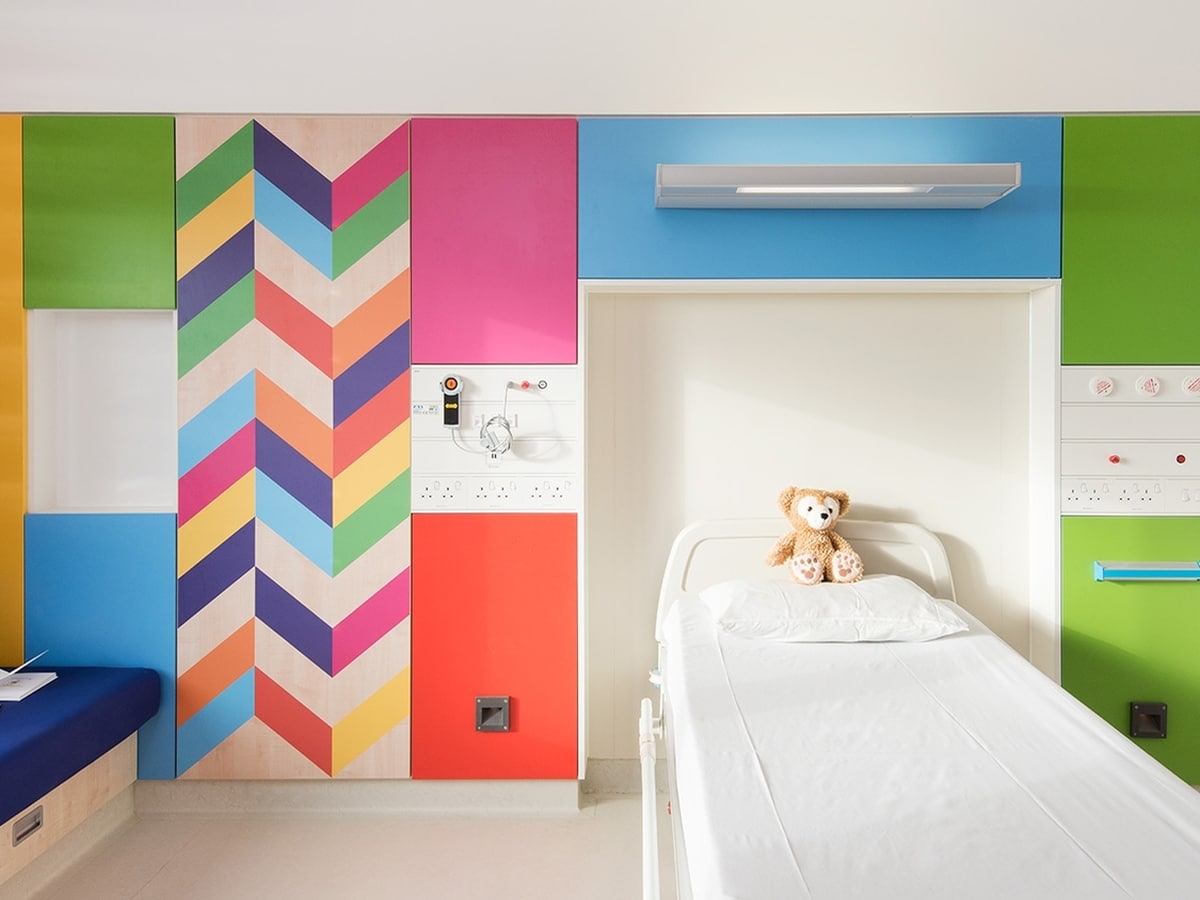 “I was very excited to be given the challenge of working in a clinical space that could make a real difference to the wellbeing of the young patients, as sometimes they have to stay in the rooms for months on end. I wanted to make bedrooms that the young patients would feel happy to wake up in, a bedroom that had a warmth and friendliness to bring a ‘sense of home’ into the rooms.”

Myerscough encountered a small problem on the path to happiness though:

“The clinical staff, quite rightly, were worried about me using strong colors and patterns. They were worried this may be detrimental to the well-being of the patients. So I made scale models of the rooms and, with the help of Artfelt, we presented the four bedrooms to 80 patients and their families—98% said they didn’t want nondescript bedrooms, they wanted them to be joyous.”

In the Operating Room

Realizing Improved Patient Care through Human-Centered Design (RIPCHD.OR) is a federally funded four-year research effort in the US. In contribution, Clemson University’s Architecture + Health Program designed an operating room prototype that serves as a platform for safer and more operationally efficient ambulatory surgery.

After a year of research and observation, the students spent the following two years working on the design, initial simulation testing, refinement and mock-up fabrication. Currently in their fourth year, they’re focusing on clinical simulation testing, the publication of results and the application of evidence-based design features into two ambulatory surgery centers.

Changing hospital design is a long process, but these projects and initiatives show the possibilities and rich potential for developing better environments for patients as well as staff. What if curing the monotony of the premises was the first step to curing the illnesses?