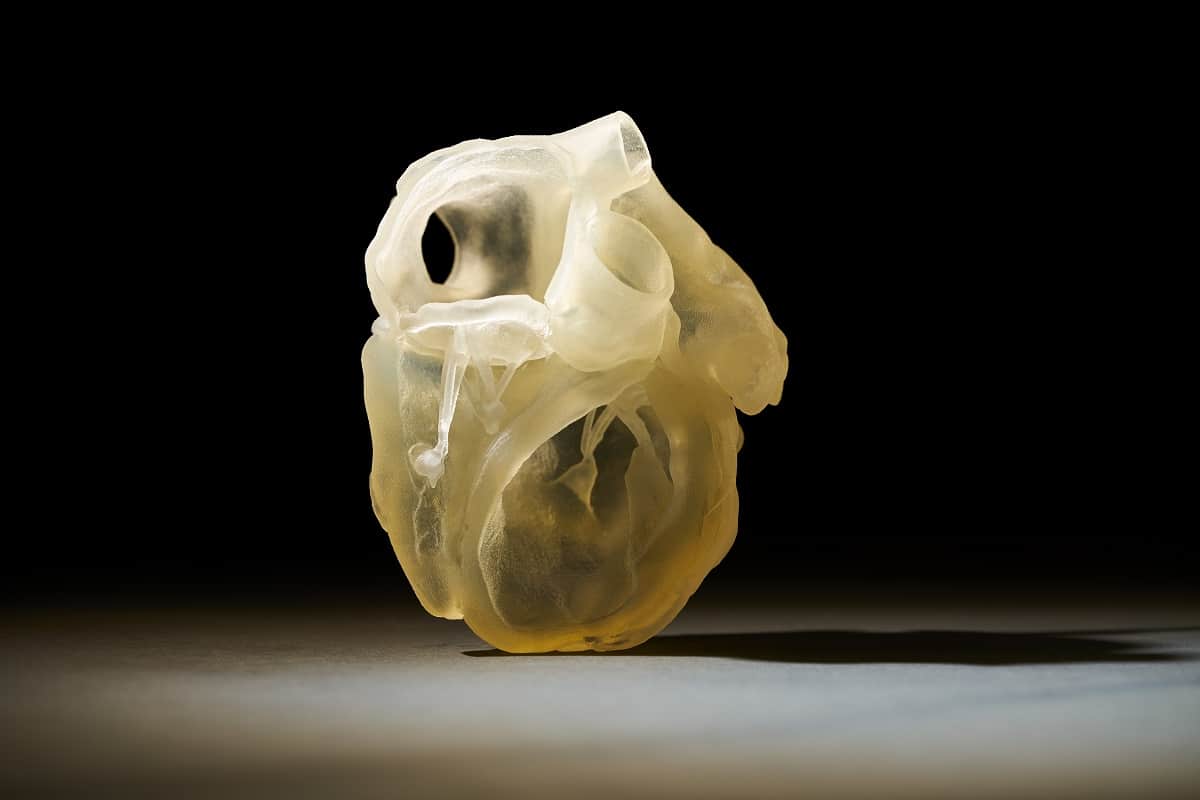 Stratasys premiered its new J750 Digital Anatomy Printer at the Medica/COMPAMED trade show. It is Stratasys’ first 3D printer specifically designed for the medical sector. With the joint launch of three new materials, it will be possible to produce ultra-realistic and functional vascular and cardiovascular models to be used for training surgeons and verifying new medical devices. These printed models, explained to us Arnaud Toutain, Medical Manager at Stratasys EMEA, have many advantages over traditional models such as animals, cadavers or silicone mannequins.

MedicalExpo e-magazine: What sparked the idea for this new 3D printer specially designed for the medical sector?

Arnaud Toutain: We started in the medical market a few years ago but not directly. We were in different markets, including aerospace and aeronautics, and we had printers that were designed for those markets and then we realized that they could also be applied very well in the medical market. But in the beginning they were not designed for the medical market. This is the case, for example, of our 3D technology PolyJet J-series 3D printers (see our article) which allow us to make rather advanced visual models with colors, transparency, hardness, softness, etc. With the J750 Digital Anatomy Printer, we have the very first machine designed from the ground up to the specifications for the medical market. This was in response to a need in the simulation market in particular.

“With this new machine, we wanted to bring a whole functional brick in order to obtain simulation results as close as possible to what we would obtain if we trained on a human.”

ME e-mag: What is the major innovation of this printer?

Arnaud Toutain: Until now, we used printers that made it possible to make visual models, with beautiful colors and transparency to see, for example, a tumor in a kidney and how it interacted with different blood vessels. But they were not functional models, i.e. if you wanted to train on a kidney model with a tumor you were in the presence of hard materials so you couldn’t directly simulate the procedure. For some applications, we were already getting a little closer to simulation thanks to our soft materials that allowed us to make vessels and train on them. It was functional but it was not designed to be close to the characteristics of human tissue. So we could have a difference in the mechanical response of these materials that did not exactly match that of human tissue. With this new machine, we wanted to bring a whole functional component in order to obtain simulation results as close as possible to what we would obtain if we trained on a human.

ME e-mag: So you designed new materials?

Arnaud Toutain: Yes, in order to achieve this we have released three new materials that will be available only on this type of machine. The first—TissueMatrix™—is what we will use first for everything that is vascular and cardiac; then the BoneMatrix™ will be used for all bone applications; finally the GelMatrix™ will be used as the first support material. Remember, in 3D printing you need a support material because you can’t print in a vacuum. It is then removed. Until now we had a support material that we removed with a high-pressure jet but this technique could be a problem if we are printing blood vessels, for example, because the jet could cause the model to burst. This new support material is both much more fluid and stronger. It allows us to remove the support much more easily on long vascular models and to reduce internal diameters in the range of 1 mm without splitting the model. It’s really something we couldn’t do before. We use another technique: a cleaning system called Blood Vessel Cleaning Station that allows the support material inside the 3D printed blood vessels to be cleaned without the need for human intervention.

“The first and main application is the direct training of surgeons to prevent them from training on a patient, a corpse or an animal. This removes all the constraints of traditional models.”

MedicalExpo e-magazine: Will this new printer also use the materials you already have?

Arnaud Toutain: Yes, our Polyjet technology, which has been around for some time, allows us to print up to six materials at a time, as well as create digital materials. That is to say, from the basic materials we will be able to create new materials, a bit like with a 2D printer when we mix cyan with magenta to obtain another color. For example, we will take our hardest material and our softest material and by mixing them in different proportions we will obtain different hardnesses. This is what our PolyJet technology does. So now with this new printer we can use all the materials that already exist and add the three new materials. From this we can create different mixes both in the proportion of materials and in the printing structure at the microscopic level. We are not going to print something flat, we are going to make microstructures to obtain many different behaviors at the end. All our technology is based on that.

ME e-mag: What can you print with this new printer?

Arnaud Toutain: The spirit of this printer is that it is evolving. We will thus gradually emerge from the “building blocks” that represent large anatomical families. For now we’re going to be working on vascular and cardiovascular, that’s what’s being developed for the release of the machine. Then we have a road map on new building blocks that will be released over time. The next one will be the spine, then we’ll add gastrointestinal elements, then the soft tissues, etc. It is in this sense that we can say it is an evolving machine. We probably won’t create new materials for these next building blocks but on the other hand we will create new digital materials, new mixes to get what we want.

ME e-mag: What are the main applications for this new printer?

Arnaud Toutain: The first and main application is the direct training of surgeons so they don’t have to train on a patient, cadaver or animal. This removes all the constraints of traditional models (see next question). It can also be used for operation planning just like our other PolyJet printers but the specificity of this printer is mainly for training.

It can also be used for all aspects of product development to verify the behavior of a medical device under almost real conditions before it is put on the market. Let’s take an example: if a medical device manufacturer develops a stent for cardiovascular applications, it can print vascular models to test its medical device from the very beginning. It can be tested much more often than if an animal were used and it is much less restrictive. And by testing the device much more often, the company can both accelerate the time to market and potentially have a more optimized device.

“It can also be used for all aspects of product development to verify the behavior of a medical device under almost real conditions before it is put on the market. Let’s take an example: if a medical device manufacturer will develop a stent for cardiovascular applications; it can print vascular models to test its medical device from the very beginning.”

Finally, another application is for Sales & Marketing because the models created with this printer can be presented at conferences to attract surgeons who can even test them on site. It is also possible to train a company’s sales teams so that they can sell medical devices in full knowledge of the facts.

ME e-mag: What are the advantages of these models compared to traditional models such as cadavers, animals or silicone mannequins?

Arnaud Toutain: All these traditional models have their limits. A cadaver, for example, does not contain living tissue, it is dry tissue, which is no longer irrigated and no longer has the biomechanics of a living being. Moreover, we don’t always have the pathology we are looking for. If you’re trying to place a stent on an aneurysm, you have to find a body that has an aneurysm. The 3D printer allows you to customize as you wish: if you want this pathology you can print it. On a cadaver, or even on an animal, we can create these pathologies but they will never exactly correspond to a pathology as it would evolve if it had naturally occurred, and this brings about additional costs because someone has to create this pathology.

Silicone models also have limitations because they are often purchased from catalogs, so there is already a delay of several weeks to obtain them. In addition to this, we only have access to what is available in the catalog so if we are looking for a very specific application with a strange pathology there will be less chance of finding it. The other thing is that silicone does not reproduce the mechanical characteristics of human anatomy. However, silicone models have advantages such as the fact that they can be reused a hundred times without damaging them. But this is not really realistic either because real human tissue cannot be operated on a hundred times without damaging it. Our models are a little more destructible than silicone models but at the same time, the human body is also destructible…

As far as animals are concerned, for ethical reasons they are used less and less. Moreover, animals do not function in exactly the same way as humans and here again, we do not necessarily find the pathology we are looking for. Our 3D models may be more expensive than a pig, for example, but if you consider that we have to rent a special environment as well as the services of an anesthetist to numb the pig, in terms of all the costs included our models will be cheaper than an animal solution. Similarly, if you test a medical device on one pig and the next day you test the same device on another pig, you may get different results and you have no way of knowing if it came from the device or from the fact that it was not the same pig. With our models, since they are replicable and always exactly the same, we remove all the bias and uncertainties due to the different anatomies.

ME e-mag: How much do your 3D printed models made with this printer cost on average?

Arnaud Toutain: It all depends on the volume and the model itself. If we print a small vascular model it can cost €100 upwards.

ME e-mag: How long does it take to get one of these 3D models?

Arnaud Toutain: It’s fast, the production itself is 10 to 20 hours maximum for very large models. It also takes our printer the same amount of time to print one or five models because the print head will scan the tray no matter what.  What can take time is the entire digital chain, i.e. the design of the model.