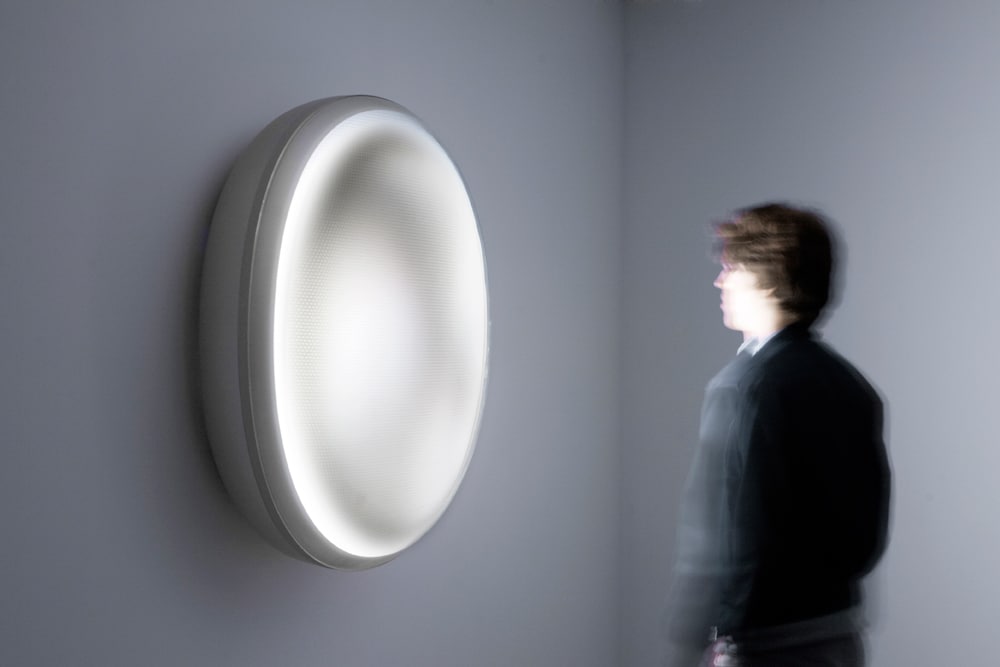 A circular screen broadcasting the sky of tomorrow in real time anywhere on the planet, like a window to the spiritual dimension of the sky—this is the concept created by the French designer Mathieu Lehanneur to accompany patients in palliative care units. “Demain est un autre jour,” French for “Tomorrow is another day,” is a meditative, therapeutic work firmly anchored in everyday life and aimed at helping patients and their families better prepare for death and accept the inevitable passage into the hereafter.

Translated into English by Monica Hutchings.

The idea came from a commission Mathieu Lehanneur had from the Diaconesses Croix Saint-Simon Hospital Group in Paris. They wanted a meditative and inward-looking work in order to better accompany patients at the end of their lives and make them feel involved and active until their last moments. It is with this process that’s both psychological and spiritual in mind that Dr. Gilbert Desfosses, his team and the hospital management entrusted the work to Mathieu Lehanneur, who was already known for his therapeutic objects, design of the invisible and ergonomics of desire.

“The hospital wanted something more, something beyond the pharmacological-technological tools at their disposal. Something beyond the exceptional work that the staff of the palliative care service carry out to accompany patients who are confronted with death, anxiety about the future, a form of fatality, and for whom the issue is no longer so much the cure as the acceptance of what is to come.”

“We needed more reverie, more inwardness and more meditation, for ourselves, for the patients and for their loved ones. It was essential to remove the strain of the anxious, dramatic atmosphere traditionally associated with our profession and tackle the questions surrounding the end of life in a more philosophical, or even spiritual, way.”

The French designer then spent time in the department to better observe the psychological, emotional and familial issues surrounding these care units. Lehanneur added:

“The energy behind this project was to bring patients back to a spiritual dimension, because the sky in its spiritual dimension is a hereafter, but also an everyday dimension by talking about the weather. This allows you to remain connected to life as it is. So we created a sky as it would be tomorrow all over the world.”

The work, which is both therapeutic and poetic, is a circular screen made of LEDs connected to the world’s major weather websites. It broadcasts the weather in any place on the planet in real time and allows you to choose which city’s sky you want to observe.

“I didn’t want the object to have a square shape similar to a computer, phone or television screen. I also didn’t want it to be positioned in front of the patient’s bed instead of the TV. It is on the side, a bit like a skylight or window opening to elsewhere.”

Upon each patient’s arrival, the device is pre-installed and programmed to broadcast the next day’s weather in the city the patient lives in or grew up in, so that the patient feels at home. Then the patient can ask the care staff to set up the weather in Marseille, New York, Rio de Janeiro, Tokyo or any other place on the planet.

Reflection on Time and Death

Behind this work is also a reflection on the impermanence of all things as well as the passing of time and death that awaits each one of us and is inseparable from life. Lehanneur said:

“Humans tend to divide and redivide time in order to better navigate it, otherwise it becomes overwhelming. They cut it into little pieces, just like space.

This work does not mean that we can change things, but it can be seen as a kind of challenge to death or a step ahead of it: ‘I’m not afraid of you, come and see! I may not be here tomorrow, but at least I know what tomorrow will look like.’ It gives some power back to the patients and gets them out of that kind of passivity that you can feel at the end of life.”

The object also helps them reconnect and reinitiate conversations.

“We spend our lives talking about the future. And for the families, there is often a form of discomfort in conversing with a loved one at the end of life as it is difficult to talk about the future with someone who has little or no future. Conversing about the weather as soon as you walk into the room, however, keeps you alive and grounded.

So I thought of a way to start a conversation between two people in a context where it is difficult to talk about future plans. In a way, the idea was to talk about the weather to get around the question of how much time is left.”

For the time being, this work is only installed in palliative care units, but it could find its place in many other services, leaving the patient free to adopt it, or not, in their own way. All you need is a wifi connection to access the weather data.

“It’s not a video that plays the same images of the same sky over and over again because I didn’t want the patient to feel trapped in a loop. The goal is not to remain in a closed system. We worked with a computer programmer who retrieved all the meteorological and atmospheric data, time of day, sky color, speed and transparency of clouds, humidity, etc., in order to create an animation that recreates the sky in real time.

There were infinite variations of grays, cloudy silhouettes and light intensity that had to be reproduced. Paradoxically, it was necessary to reach this level of sophistication so that the patient could let their mind go, as if lying in a field, eyes turned to the sky. The patient will never see the same cloud or the same sky.”

The Screen That Wakes You Up

When a staff member of the Diaconesses Croix Saint-Simon Hospital Group asked one of his patients at the end of his life how he perceived Mathieu Lehanneur’s work, this person replied, while pointing to the television: