From Component Supply to Equipment Refurbishment, Philips Commits to Reducing its Carbon Footprint 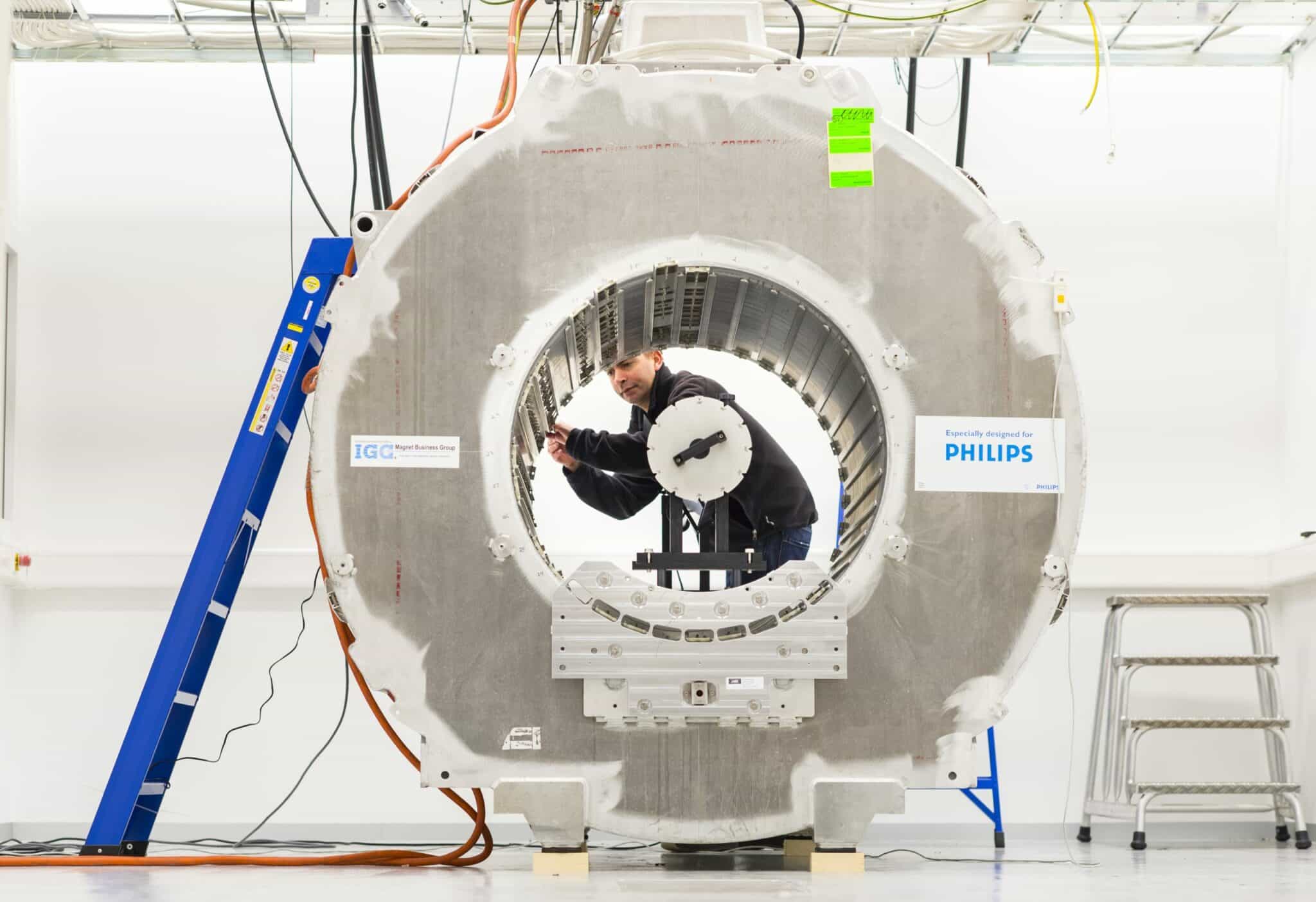 Philips, a global leader in medical technology, unveiled new measures to combat climate change in the framework of the 26th UN Climate Change Conference of the Parties (COP26) that took place in Glasgow from October 31 – November 12, 2021. The Dutch company is working upstream by seeking to engage its component suppliers in reducing their greenhouse gas emissions and downstream by working with hospitals on the use of their equipment. One of the company’s actions is a partnership it started with the Rennes University Hospital where they experimented with reducing the carbon footprint of a complete interventional room.

Philips wishes to reinforce its sustainable development program, which has already been in place for many years, by acting first of all upstream. To do this, it wants to involve its 200 suppliers so that at least 50% of them commit to CO₂ emissions reduction targets by 2025. Robert Metzke, Philips Global Health Sustainability, explained in a web press conference:

“Healthcare systems account for 4.4 percent of global CO₂ emissions. That’s more than the aviation or shipping industry. The supply chain is responsible for 71% of CO₂ emissions within the European Union. Hospitals produce 13kg of waste per bed per day, of which 15-25% is hazardous. Together, by addressing our environmental responsibility, we can build sustainable healthcare.”

“We are ranked among one the most sustainable companies in the world. We have a strong provider sustainability program and we will use these capabilities to work with our suppliers to also improve their energy efficiency (…). We could use financial incentives to make it attractive for them to move in this direction.”

“In an economy, you are always upstream or downstream of someone. Our suppliers are upstream of us because they are going to provide us with components, elements that we are going to assemble. Now we want to start impacting upstream, so we will increasingly choose our suppliers on the basis of sustainability commitments. We aim to have 50% of them join this movement. It’s taking time, but we’re starting to move up the chain to try to have a real environmental impact.”

Downstream, Philips wants to work with hospitals that use its devices, particularly with regard to equipment usage. The company has developed a partnership with Rennes University Hospital, which is among the top 10 French hospitals and has a history of fighting global warming and limiting its carbon footprint.

In order to get a clear idea of the results of its efforts, Rennes University Hospital carried out a full carbon footprint in 2019-2020, covering the entire spectrum of its emissions including its own activity and the activity it generates elsewhere. The results were concluded by a method called the Product Environmental Footprint (recognized at an EU level). They show that the hospital’s annual carbon footprint is 81,000 tons of carbon equivalent, or about 50 tons of carbon equivalent per bed and 4% of the carbon footprint of a city like Rennes.

“This is not insignificant and it is in line with the international figures for the healthcare sector as a whole on global carbon footprints. Our purchases account for almost half of our carbon footprint, particularly drugs and medical devices.”

On this aspect, Rennes University Hospital made a commitment with Philips to jointly reduce the carbon footprint of one of the pieces of equipment that the university hospital buys from the company, namely for an interventional imaging room. This is a radiology room equipped with a C-arm for interventional neuroradiology used in the care of stroke victims. This room uses anesthesia monitors, implantable and reusable medical devices, stents and catheters, which sometimes do not come from Philips.

“The UHC asked Philips to trace all the components of the equipment delivered (the C-arm table), how they were manufactured, with what energy they were produced, etc. And we provided all the usage data, all the consumption observed in terms of energy (electrical consumption, water, etc.). We thus deconstructed the entire lifecycle of this equipment from the search for raw materials through to the assembly of components, manufacturing, transport, delivery, use in the hospital and refurbishing. We have broken down the carbon footprint of each of these stages and we already had some initial insight into this so now we can start working on them. The question now is to calculate how we can reduce all of this.”

The hospital found out that depending on how the room was used, there could be huge variations in the energy consumption, for example between equipment equipped with standby devices and equipment that can remain ready-to-use or in-activity. So Philips will have to work on this so that the rest of its equipment systems can be put systematically on standby, while the hospital will work on the daily use of the equipment. Eventually, the hospital could discuss with all the other suppliers who contribute to the activity in this room.

“This could be a margin of progress because today’s reconstructed equipment has levels of performance that are quite equivalent to what you would find on the new market. The race to acquire new equipment must stop at some point. As much as there are things that we won’t be able to change overnight, these are things that we can work on very concretely.”

Refurbishment is also one of Philips’ commitments. David Corcos explained:

“Our goal is to eventually recover 100 percent of the equipment we replace. What do we do with this equipment afterwards? Either we don’t replace the machine completely but we upgrade it, that is to say that we change the software, we completely update the IT and old functionalities as well as the essential elements, and we keep the rest. This is the case for MRI and scanners in particular. Either we change with new equipment and the used device is refurbished (reconditioned) to be resold on another market. Or we can’t refurbish it, in which case it is completely recycled by putting it into a clean, standardized and monitored recycling cycle. We can reuse spare parts for our equipment maintenance activity.”

Philips’ action plan to support the UN 2025 global goals is broken down into three strong areas: health and wellness for all, climate change and circular economy.