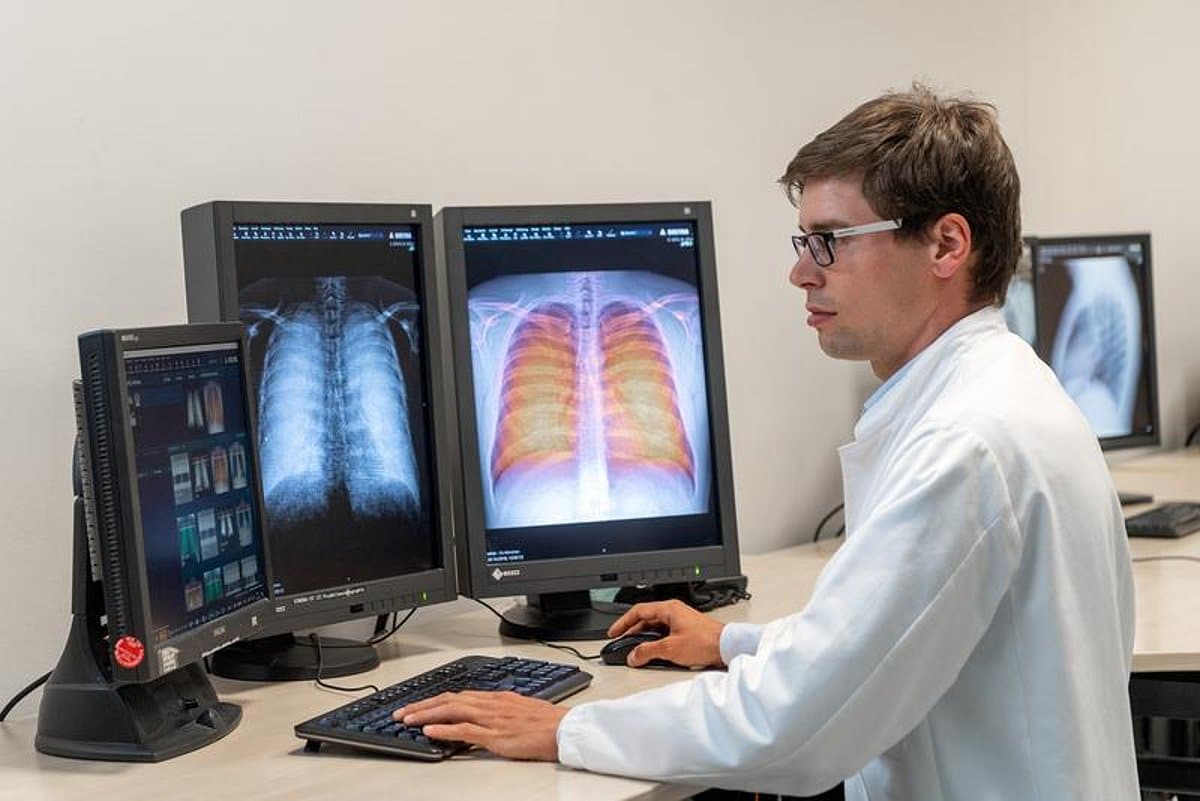 An innovative new X-ray method can accurately diagnose early signs of lung disease using a fraction of the radiation of standard screening. Scientists at the Technical University of Munich (TUM) are the first to successfully use “dark-field X-ray” chest imaging to quickly and effectively detect chronic obstructive pulmonary disease (COPD).

This form of X-ray can visualize early changes in the alveolar structure caused by the lung disease COPD and it only requires only one-fiftieth of the radiation dose typically applied. Standard radiography relies on absorption to get an image: an X-ray beam is fired at an opaque object and the radiation that emerges on the far side is captured by a photographic film or digital detector.

In comparison, instead of recording what is known as an X-ray beam’s “bright field”—the radiation that passes through the sample—dark X-ray involves measuring a portion of the “dark field”—the radiation scattered or emitted by the object. In doing so, it picks up extra information stored in this scattered radiation that is usually overlooked. For patients with respiratory illness, this means early changes in the alveolar structure that are seen in the scatterings where tissue and air meet.

Every year over, four million people die of serious respiratory ailments worldwide. Partially destroyed alveoli and an over-inflation of the lungs, known as emphysema, are typical of the life-threatening ailment COPD. However, the fine distinctions between healthy and diseased tissue are barely visible on conventional chest X-rays, and detailed diagnostic information is only available using three-dimensional computed tomography approaches. This can be expensive and time-consuming.

According to the researchers, the new procedure developed at TUM could provide a cost-effective and easy-to-access alternative for early detection and follow-up examinations. Dark-field chest X-ray technology involves a significantly lower radiation dose than presently used computed tomography as it requires only one exposure per patient instead of the large number of individual images taken from different directions necessary for computed tomography.

Franz Pfeiffer, Director of the Munich Institute of Biomedical Engineering at TUM, led a research team that carried out the first clinical patient study that used dark X-ray technology for the diagnosis of COPD. He said:

“The X-ray dark-field signal is particularly strong for interfaces between air and tissue. This makes it possible for a dark-field X-ray image of the lung to clearly distinguish between intact alveoli, i.e. those filled with air, and regions in which less intact alveoli exist.”

Initial results from the trial, published in Lancet Digital Health, have confirmed that the dark-field X-rays provide additional image information on the underlying microstructure of the lung. Dr. Pfeiffer added:

“Dark-field chest X-rays are currently giving us a chance to significantly improve the early detection of lung diseases and to implement this detection on a wider basis than before.”

“In the future, dark-field X-rays could help improve early detection of COPD and other respiratory ailments. Given the close connection between the alveolar structure and the functional condition of the lung, this ability is of great significance for pulmonary medicine.”

COPD is the third leading cause of death worldwide, according to the World Health Organization. It produces persistent and progressive respiratory symptoms, including difficulty breathing and coughing, and is caused by long-term exposure to harmful gases and particles combined with individual factors, including events which influence lung growth in childhood and genetics. Early diagnosis and treatment, including stopping smoking, are needed to slow the progression of symptoms and reduce flare-ups.

Development of the Dark-Field Method

Dark-field X-ray imaging is not limited to COPD, and further studies with other pulmonary pathologies such as pulmonary fibrosis, pneumothorax, lung cancer and pneumonia, including Covid-19, are being conducted.

Pfeiffer hopes his work will speed up clinical studies and the development of marketable equipment that uses the dark-field method. He and his colleagues gained approval last May from the German Federal Office for Radiation Protection (BfS) to test the method for diagnosis of the respiratory ailment Covid-19 caused by Coronavirus. He said:

“We can assume that the demand for cost-effective, reliable and low-impact Covid-19 diagnostics will remain unchanged for quite some time.”