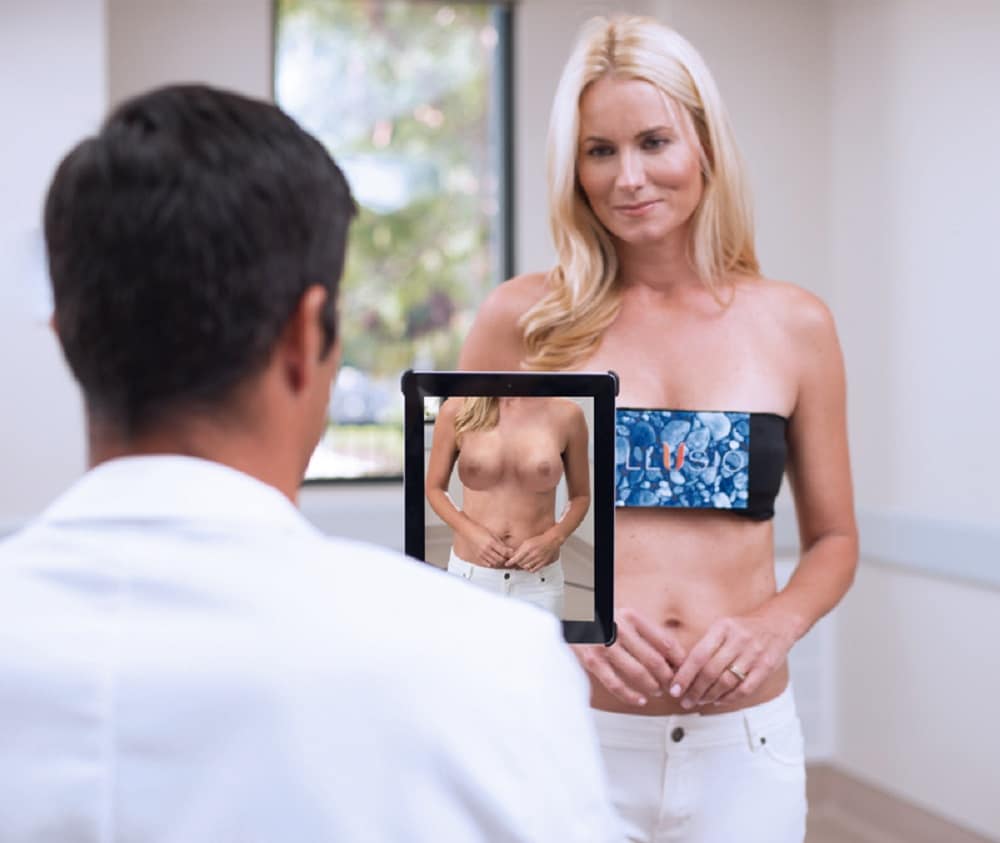 The use of augmented reality could change the world of healthcare and plastic surgery. ILLUSIO is a California-based company which is using this cutting-edge technology to offer for the very first time patients an accurate, real-time 3D picture of how they will look after reconstructive or cosmetic breast surgery.

To produce these images, the surgeon only needs the ILLUSIO augmented reality software, an iPad or Android tablet and a special black band that covers the patient’s breasts. Ethan Winner, CEO and co-founder of ILLUSIO, explained:

“That black band has a marker on the front of it, and the die on that marker is what is recognized by the camera on the iPad. That enables the software to lay a virtual breast image on the patient and the image stays on the patient. The iPad works like a virtual mirror. You can go closer to the patient or further away and the breast model stays in correct proportions to the body.”

Dr. Kyle Song, another company co-founder and its Chief Medical Officer, has already used this technology on a hundred patients. The ILLUSIO team started offering access to the software in January for about $500 a month. It quickly became extremely popular. ILLUSIO has been contacted by surgeons and distributors from all over the world. Even the Stanford University School of Medicine has shown interest. Dr. Song said:

“This technology answers the need for patients undergoing breast surgery to really feel comfortable with their decision. It helps them develop trust in their surgeon and really takes away a lot of fear about the unknowns of surgery.”

According to him, breast augmentation is now the most popular cosmetic procedure in the United States, with almost 300,000 surgeries a year. He added:

“A woman’s breasts are such a part of her feminine identity that there is always a lot of anxiety and fear that goes along with the surgery. There hasn’t been any great imaging or projection software that can show a woman what she is going to look like after surgery. And especially none that does it in real time.”

Each surgeon has a different technique for breast augmentation. To Dr. Song, the beauty of this software is that there are no algorithms or measurements to enter into the system. It is done “entirely artistically.” Each surgeon creates a rendering of what the desired or anticipated result will be based on his or her experience and on the patient’s breast anatomy, body type, skin type and similar factors. Dr. Song said:

“It has become such an effective tool for communication and has so increased the number of surgeries I’ve done, that I use this for every single breast surgery patient that I see.”

Women are also able to download a patient version of the software to recreate their experience in the doctor’s office at home, where they feel more comfortable. Later this year, the ILLUSIO team wants to extend the technology to abdominal procedures and eventually to facial features, like nose reconstruction. It also can be used for reconstructive surgery, such as after an accident. Winner said:

“It creates a visual bridge between the surgeon and the patient. There is an enormous future for augmented reality.”