The system consists in a SmartPod, which is inserted in a SmartVest. The pod, which has a GPS chip, enables tracking of a player’s movements, coverage of the soccer field, speed, distance covered and various other metrics such as the impact, workload and intensity data, throughout the time you are training. This data is then sent to the SmartCoach application. In an interview with MedicalExpo e-magazine, Benjamin Hubert explained:

“Essentially that system of three things, the pod, the vest and the app, helps soccer players progress by understanding their own performance. Players can see basically what kind of performance they gave in training or during a game situation in a soccer match. They can then compare that to friends, they can benchmark it against league athletes.”

The pod, which has a GPS chip, enables to track a player’s movements. (Photo: LAYER)

To help the user digest all this data, the SmartCoach technology provides training insights through an artificial intelligence program in the app. Based on Premier League coaches’ expertise, it brings soccer players to a better training level. Hubert said:

“It gives you advice on how to train before a game, how often to train, what type of training you need, based on your recent performances.”

The app helps to boost your preparation, understand your performance and manage your recovery. 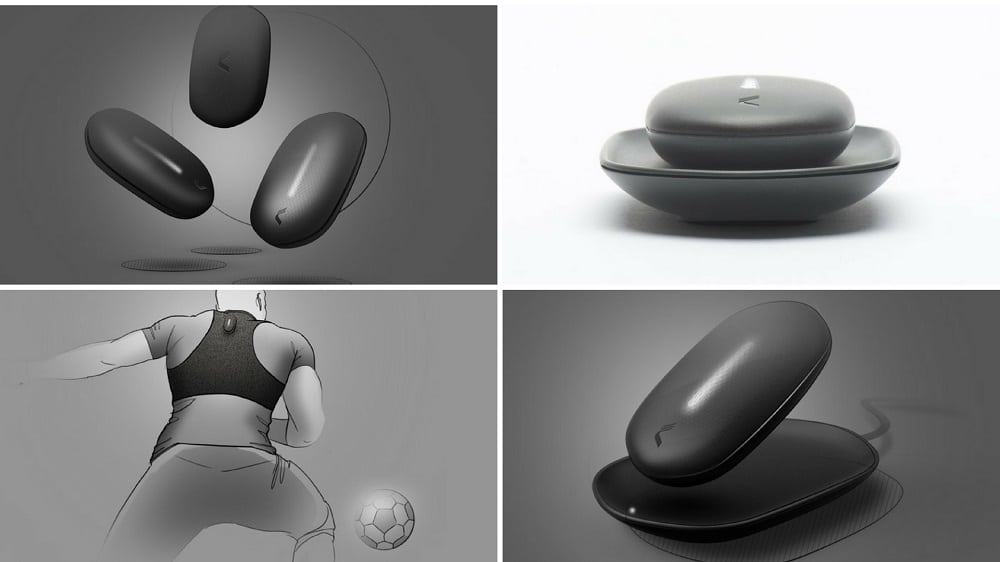 The system in another guise exists as an elite product, produced by Catapult. A world leader in elite sports performance analytics, Catapult sought to bring their experience to aspiring soccer players in the amateur game, to help them improve their performance. Hubert explained:

“They came to us asking for a consumer product. So, we took some of the technology, we changed it, we streamlined it, we brought a new form, we combined new material—basically to make a consumer platform.”

As always with Layer, the SmartPod’s design is stylish, sober and efficient. Charged wirelessly, it combines GPS and sports tracking technology. The waterproof device fits into a SmartVest, whose fabric activates its auto-detect technology. The fabric is lightweight and machine washable.

Available in several languages, there is no age nor gender limit to using PLAYR.

“When you put in your age, it benchmarks your performance against what you can and should be doing for your age and gender.”

More functionalities, not yet included in PLAYR, are expected in future releases. “There will be a team mode,” the designer explained. A nutrition feature might also be added. The system could even be potentially adapted to other sports in the future.

Benjamin Hubert has tested the pod himself:

“As a professional you have a coaching team, as an amateur you know nothing about your performance. Having more information is really great.”