“HospitaCité” is a joint project between the Belgian firm VK Architects & Engineers and the French company Michel Rémon & Associés to renovate the Saint-Luc University Clinic in Brussels in order to make it “more human.” The goal is to reconnect the hospital to the university town and use the architecture to psychologically favor patients’ recovery and the well-being of health care staff. It’s a huge 250 million euro project which should be finished by 2025. We spoke with Stephane Vermeulen and Michel Rémon, the two project managers. Interview translated from French by Monica Hutchings.

ME e-mag: Can you explain the positive effects of your project on patients?

Stephane Vermeulen: The idea is really to develop salutogenic elements to favor health, that is to say, develop everything human, by making the buildings on a human scale, favoring contact with nature, etc. Before the roof of the operating and clinical support unit was a parking lot. Now it’s going to be a large hanging botanical garden that will connect the old building and the new tower. So patients will have a view not of a parking lot but of hanging gardens, their relationship with the outside environment will be much more pleasant.

“Patients will have a view not of a parking lot but of hanging gardens, their relationship with the outside environment will be much more pleasant.”

The rooms have also been reworked. We made the decision to offer individual rooms almost exclusively. The big difference is that they will be family rooms with a specific section for families and a fold-out bed. So that in the future families can also offer solutions to the cost of care. 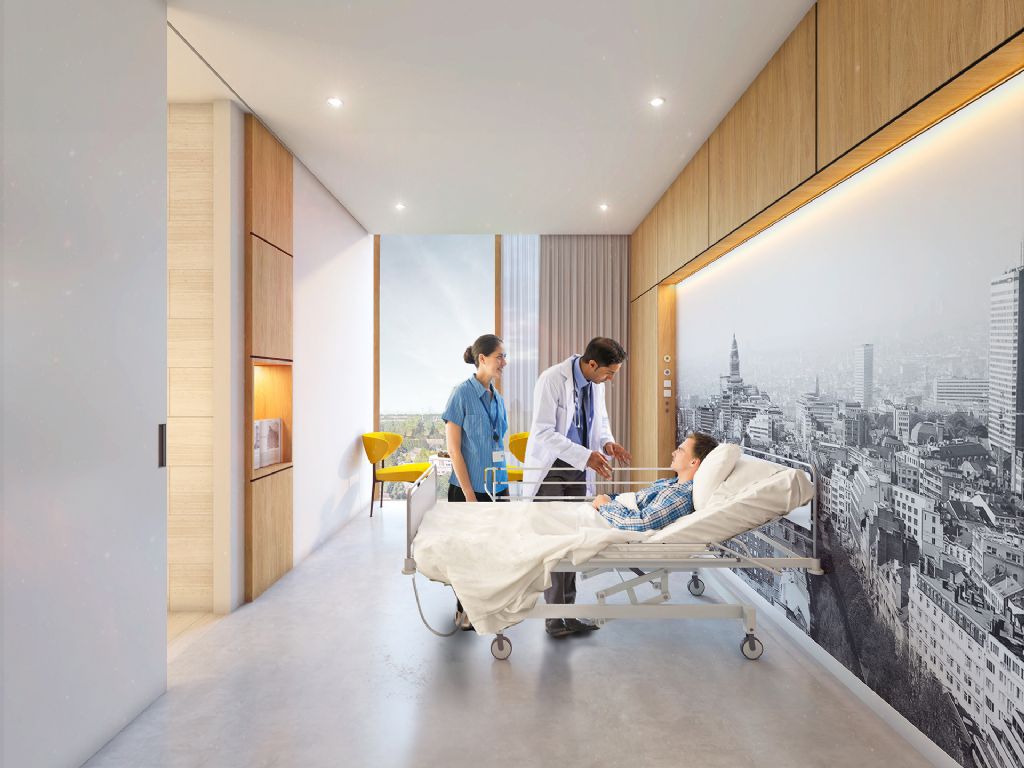 The rooms have also been reworked with a specific section for families. (Photo credit: VK Architects)

As it’s becoming more and more difficult to find health care staff, this means the existing staff are less attentive to each patient so if we make the room nicer with a family section where an additional person can stay this will compensate this lack while offering the patient a lot of support. In Asia they are already doing this. They have a serious lack of health care staff and we see families going to the hospital every day, even preparing meals there. There is a real psychological aspect for the patient which will help them get better faster. This also saves money.

“The big difference is that they will be family rooms with a specific section for families and a fold-out bed.”

In the same way, for the lobby we have used the style often used in Belgium which lends a certain grandeur not just to the entrance but to all common areas. We have tried not to create hallways but avenues which will lead patients and visitors intuitively to certain elevators for example, so that it’s easier to find your way. 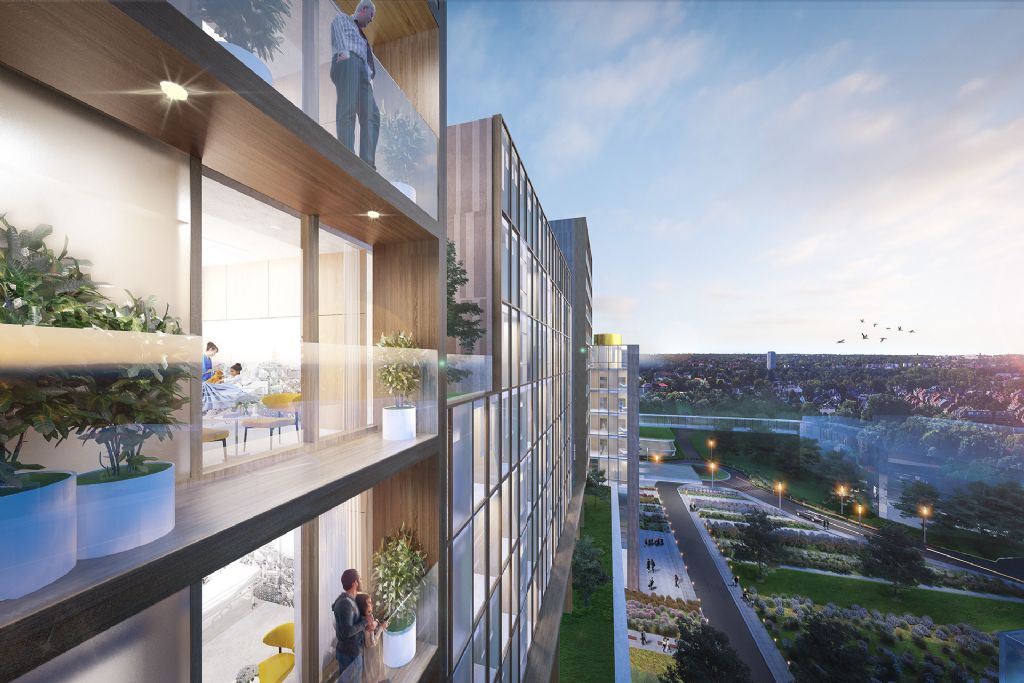 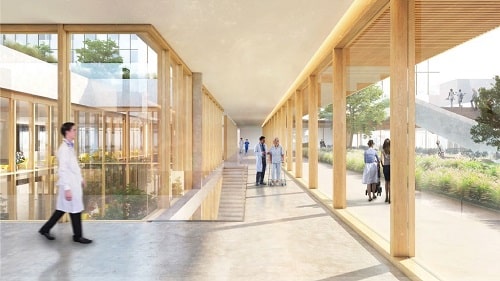 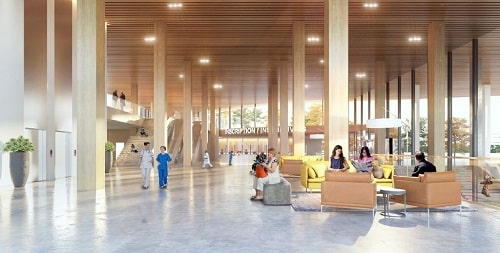 Wood and glass are also two elements that will be everywhere in the future hospital. Glass because we really want to open up the hospital to the outside. Whereas wood gives a very human and natural touch which was used a lot less than concrete in the past because of cost and upkeep. But concrete, on a human level, is not the most pleasant material… For the wood, we’ll need to use a durable wood that requires little to no maintenance and that ages well. 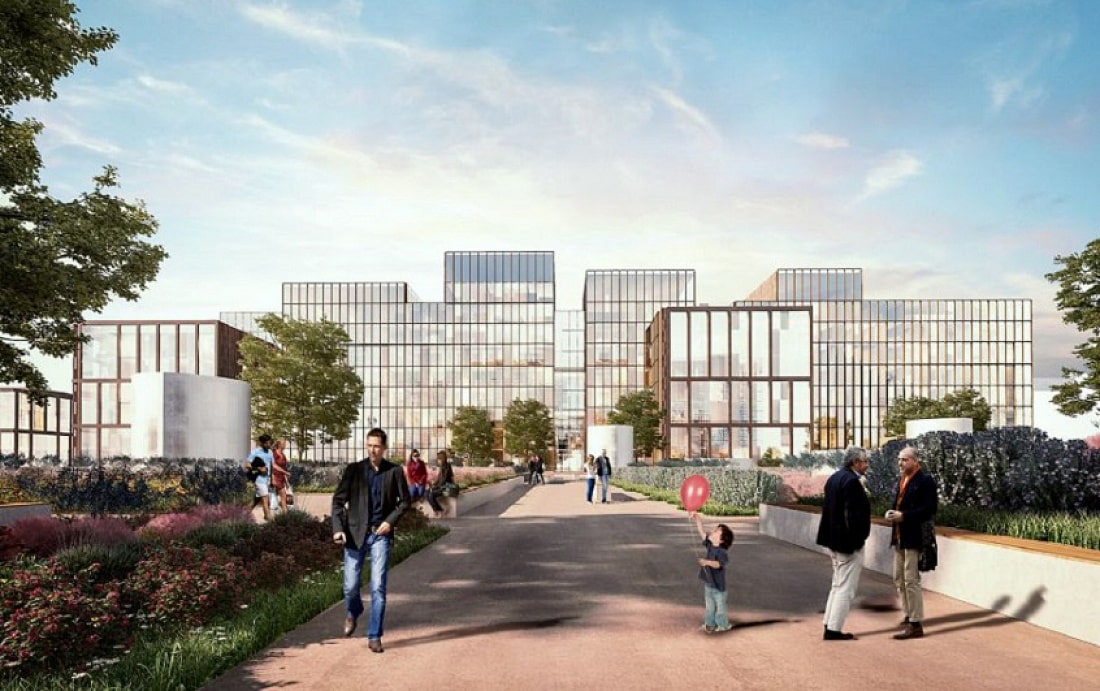 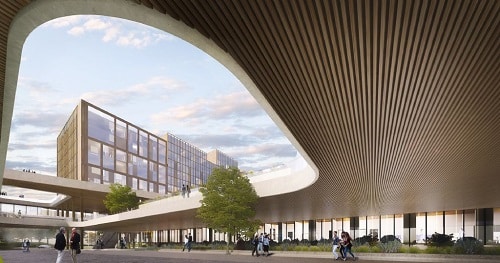 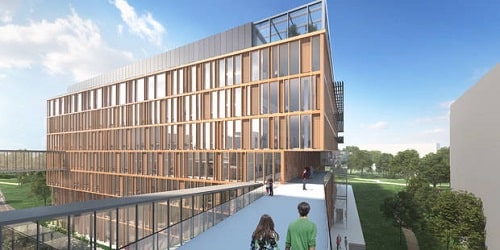 ME e-mag: What specifically has been done for the health care staff?

Stephane Vermeulen: Given that for each patient there are about three to four staff members, all of these improvements are being made as much, if not more so, for health care staff members who won’t be staying at the hospital for three or four days but for several years.

The most important thing was to break up the huge operating and clinical support unit which had little to no light and to introduce large patios in several places in order to let the light in. Some health care staff members were basically working in a basement from morning till night. From now on we’re bringing light to the operating block and intensive care unit, which will improve the quality of life.

Urban and Architectural Issues at Stake

MedicalExpo e-magazine: What is the project’s main innovation?

Michel Rémon: The specificity of the project is that there are real urban and architectural issues at stake. We had a condition from the very start, and that’s the real innovation, to make the Saint-Luc University Clinic more human. This hospital was built in the 70s as a big block in the middle of the countryside. There’s a huge operating and clinical support unit on four levels with an in-patient unit stuck like a bar on top, on the side. All of it was built in a pretty harsh way with lots of concrete.

“We had a condition from the very start, and that’s the real innovation, to make the Saint-Luc University Clinic more human.”

At the same time in 1968 just next door the student town with the university and university buildings, laboratory etc. was built. The architect chosen for this at the time was Lucien Kroll, a proponent of participatory architecture. He built the campus working with the students over the course of very long design workshops. The whole project has become a sort of model today, a unique example of this type of architecture, which is in the process of being designated a Belgian heritage site.

The buildings on this campus were, on an architectural level, in stark contrast with the Saint-Luc hospital. On one hand was the pure machine built by an architect who had designed everything in a very minimalist and functional way, and on the other side of the road was this university town which was simpler on a functional level but had a very distinctive architecture with buildings that were different from each other with several materials used for the facade. This looked like two armies facing each other and seeing the other as the enemy.

The idea that we had was not just to renovate the existing hospital by small pieces and build a 60,000 m2 second tower for in-patients on the other side of the operating and clinical support unit, but it was above all to link the two, that is the hospital and the student town.

“There’s light everywhere, with lots of windows and wood.”

ME e-mag: What have you done on an architectural level to make the hospital more human?

Michel Rémon: First we tried to introduce bridges all over the place so the two environments would communicate and so the student town, which is full of bars and restaurants, would act as a relaxing space for the hospital via a pleasant footbridge—not the existing one which looks like an obstacle course.

Then, the new 120-meter-long in-patient tower that we’re going to build won’t be like a bar stuck on top but like several smaller buildings entangled and entwined that will give the impression of a city skyline. From the exterior the hospital will look like something really residential, really human. We’re also going to redo the lobby and make it more welcoming with shops, convenience stores and a real restaurant. 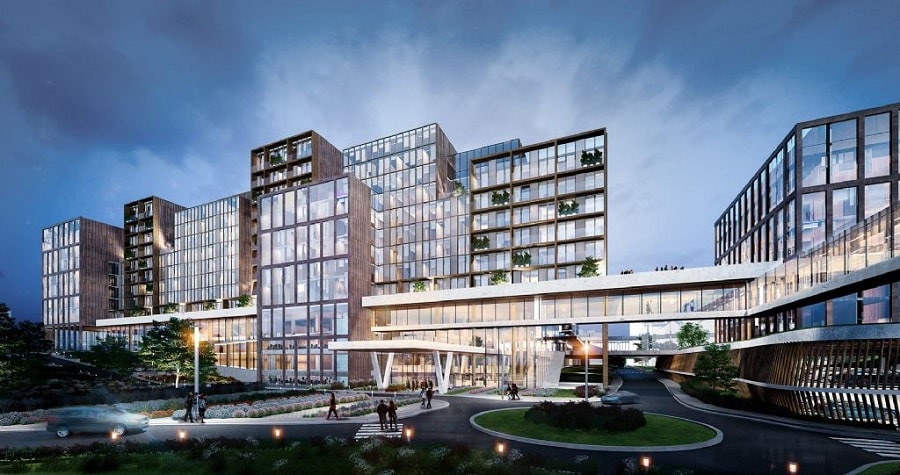 From the exterior the hospital will look like something really residential, really human. (Photo credit: VK Architects)

The goal is that the hospital no longer look like a harsh machine. That when you arrive you find yourself facing a building that’s welcoming and benevolent, you see the entrance clearly, there’s light everywhere, with lots of windows and wood. It won’t look like a big mean bar of a building where you can’t see many windows, it will look like a building you could live in and psychologically this is important for patients.