Scientists have discovered that stimulating damaged spinal cords with electricity brings back movement to limbs that have been damaged through accidents.

Last year, teams at separate research centers in America used electrical stimulation of the spine to recover movement in seven people. At the same time, researchers in Switzerland used a version of the technique to help three more paralyzed people. Led by neuroscientists Grégoire Courtine, at the Swiss Federal Institute of Technology in Lausanne, and Jocelyne Bloch, at the University of Lausanne, the Swiss team said that their work exceeded previous efforts.

Early evidence from the joint study shows that spinal nerves in paralyzed patients form new connections after electrical stimulation, even after the electricity is switched off. After intensive therapy three patients who were paralyzed in separate accidents were able to stand independently and walk short distances on crutches, or with support.

Courtine is calling for the technique to be moved from experimental trials into hospitals around the world. He said his team’s approach of precisely timed stimulation could work better than earlier efforts that used continuous stimulation, which might be blocking some residual signals from traveling from the legs back to the brain.

After intensive therapy patients who were paralyzed were able to stand independently and walk short distances with support. (Credit: Jean-Baptiste Mignardot)

The electrical stimulation does not produce motion independently and works only when the study participants attempt to make movements themselves. Courtine wrote in the journal Nature:

“It really works as an amplifier. It’s not that we’re taking over control of the leg. The patients—they have to do it.”

The startup GTX medical, co-founded by Courtine and Bloch, will now use these findings to develop tailored neurotechnology that they hope to see rolled out at rehabilitation clinics worldwide. Courtine said:

“We are building next-generation neurotechnology that will also be tested very early post-injury when the potential for recovery is high and the neuromuscular system has not yet undergone the atrophy that follows chronic paralysis. Our goal is to develop a widely accessible treatment.”

This follows in the steps of earlier technology developed by American scientists that used continuous electrical stimulation from an implant to spinal cords enabling some paralyzed patients to take several steps.

Dr. Claudia Angeli of Kentucky Spinal Cord Injury Research Center at the University of Louisville, who led one study, implanted 16 electrodes in the lower back of four patients to stimulate the connections damaged by injury. After implantation of the device and locomotor training, two out of four patients were eventually able to walk over the ground unassisted. 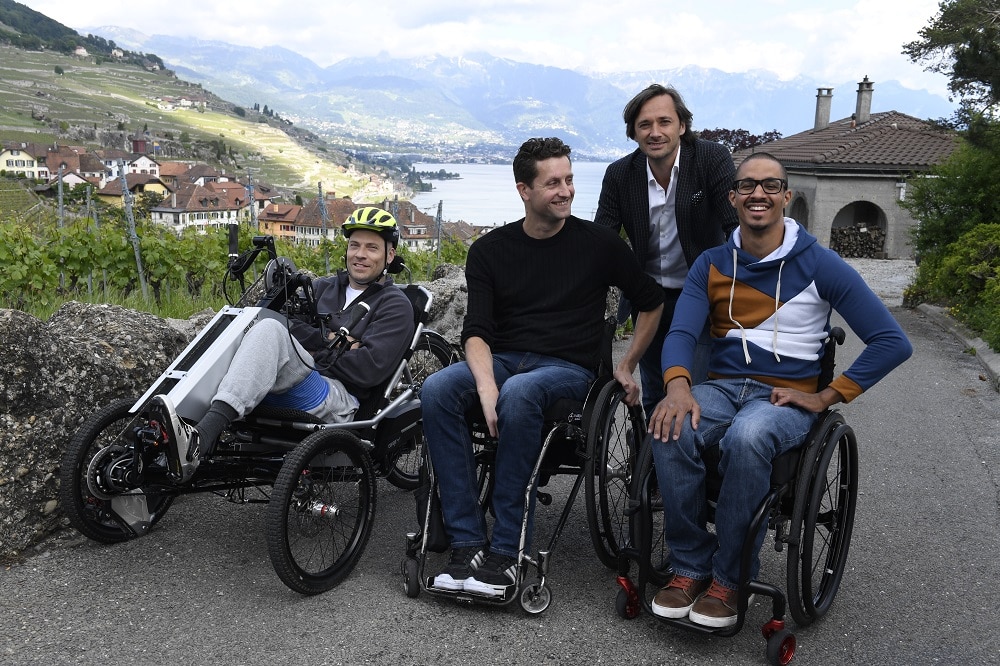 A separate study by researchers from UCLA and the Mayo Clinic in Minnesota reported some success with a similar technique. After 43 weeks of training with an electrical implant, one 29-year-old patient who was paralyzed in a snowboarding accident could walk without assistance on a treadmill. However, he did not regain the feeling in his legs that he had lost after the accident.

A spinal cord injury stops instructions from the brain from reaching the muscles, causing paralysis. The electric implants help the lost signals reach their intended destination. At this stage the techniques remain experimental, but in one case the patient is using the device at home in her day-to-day life. In another patient, there was evidence of the damaged nerves in the spinal cord starting to regrow.

Commenting on the combined findings, Chet Moritz, an associate professor at the University of Washington in Seattle, said:

“It now appears that many people can regain the ability to control their paralyzed limbs and even walk again through the innovative combination of spinal stimulation and rehabilitation… This stimulation combined with rehabilitation is actually helping to direct plasticity and healing of the nervous system around the injury.”